Find this article at:
go.ncsu.edu/readext?824461
— Written By Colby Griffin and last updated by Ginny Moore

Each year I watch in wonder as creation begins its annual adjustment from the summer swelter to the crispness of autumn. The near deafening sounds of cicadas and katydids in the evening gradually decrease as temperatures cool. This is also when birds begin their annual fall migration to their wintering grounds. Just like you need to stop at a gas station to refuel on a long car trip, birds stop to eat fruits along their migration path. If you’re interested in making your yard or property a helpful refueling station for birds, there are several species to plant and certainly retain within your landscape. Cornus florida, Flowering dogwood is native to the eastern United States 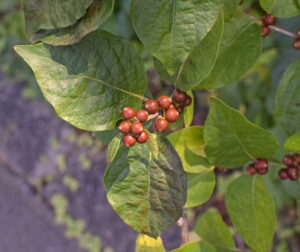 where it’s commonly found along woodland edges and in yards. In late summer, its bright red fruits mature. They have a high-fat content and are a food resource for migrants such as wood thrushes, red-eyed vireos, and many other songbirds. Euonymus americanus, Strawberry bush is native to woodlands across much of the eastern United States. In late summer and into autumn, you’ll find its warty, red fruits all throughout the bush. When immature, the fruits resemble a strawberry, hence its common name. Once the fruit capsules split open, though, you’ll understand its other common name, Hearts-a-Bustin’.

Although the orangish-red seeds are poisonous to humans, wild turkeys and many songbirds eat them with no ill effect. Don’t get this one confused with its exotic cousin though, the invasive Euonymous alatus. If you’re purchasing for your home landscape, be sure it’s our native species. Rhus glabra, Smooth sumac is native to much of North America in roadsides, fields, and woodland edges. It often spreads by rhizomes (underground stems) into dense stands. 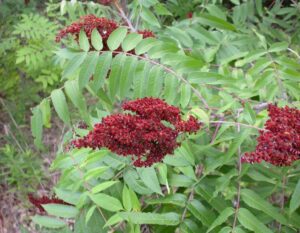 The compound leaves have a long central stalk (rachis) that’s pinkish and has a waxy coating. Although they are often not a preferred food source, many songbirds eat the red fruits of female plants during migration, including pine warblers and eastern phoebes. Callicarpa americana, American beautyberry grows in sunny areas with moist soil that’s sandy or rocky. It has large leaves with a long leaf stalk. The magenta fruits grow in clusters that hug the stem. These attractive fruits add color to yards and woodlands in late summer and are an excellent food source for birds. 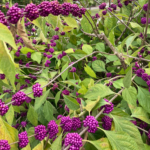 Numerous songbirds, including purple finches and gray catbirds, feed on the fruits. In autumn, fields and roadsides across North Carolina are painted in a beautiful palette of Solidago spp or Goldenrod. People tend to blame these common wildflowers for their allergies or hay fever, but goldenrods are not the problem. Rather, they likely stem from another less showy plant that often grows in similar habitats Ambrosia artemisiifolia, Common ragweed. Pollinators do not visit this plant. Common ragweed is wind pollinated and releases a huge amount of pollen to ensure a successful seed set. This tiny pollen is what gets breathed in causing hay fever. Goldenrods, on the other hand, do not release pollen into the air for pollination. Rather, they produce nectar that attracts a tremendous variety of butterflies, moths, bees, and other pollinators. Given their abundance, goldenrod seeds provide a great food resource for birds and other wildlife during fall and winter.

For more information about horticulture and other topics please contact the N.C. Cooperative Extension, Franklin County Center at 919-496-3344 or Colby Griffin, Commercial and Consumer Horticulture Extension Agent, at colby_griffin@ncsu.edu.