Find this article at:
go.ncsu.edu/readext?612365
— Written By Colby Griffin and last updated by Ginny Moore 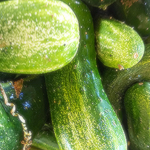 Nothing quite says summertime like that of a freshly harvested cucumber. There are two basic types of cucumbers – those that are eaten fresh (known as the slicing variety) and those that are grown for pickling. North Carolina vegetable farmers rank third in the nation for cucumber production, growing 149 million pounds of cukes. Here in Franklin County, we have over 600 acres in pickling cucumber production with 24 growers contributing. Most of what is harvested is sent to Mount Olive Pickle Company for processing. It is easy to grow cucumbers in the home garden as well.

Cucumbers are in the plant family Curbitaceae, which also include squashes and melons. They are sensitive to cold and will not germinate until soil temperatures reach 60 degrees or warmer. You can start them from seed indoors in early spring or direct seed them outdoors during the summer. However, keep in mind that there is increased disease and insect pressure on summer vegetables that are planted later in the season. Cucumbers are a vining crop and need plenty of room to grow. Be sure to space them 8-12 inches apart. If space is limited you can use a trellis. There are also “bush” type cucumbers that won’t run nearly as much and create more of a tight plant. Cucumbers prefer full sun and to be well drained, loamy soil with weekly watering.

Cucumbers are 96% water and can be up to 20 degrees cooler than the outside air temperature due to their high-water content. Cucumbers are best eaten raw and added to sandwiches, wraps, dressings, dips or salads. They can also be served with hummus, salsa or low-fat dressing for a dip. Cucumbers are a healthy snack and contain many nutrients that include vitamins C, B1, and K. They also contain potassium, magnesium and manganese. Cucumbers contain health benefiting polyphenols called lignans which have been studied in cruciferous vegetables like broccoli and cabbage and allium vegetables like onions and garlic. The presences of these lignans have shown a strong connection to a reduced risk of cardiovascular disease and certain cancers. Cucumbers are also a rich source of the phytonutrients, cucurbitacins. Cucurbitacins are also known for their cancer-fighting abilities. Other phytonutrients found in cucumbers provide antioxidant and anti-inflammatory benefits to the body. Remember to wash your cucumbers under clean, running water and pat dry with clean paper towels before eating. 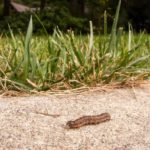 Fall armyworms are approximately 1-1½ inches long, depending on instar, and can vary in color from a green to mottled brown, to almost black (Figure 1). Fall armyworms have wide black stripe running down each lateral (side) of the body. Sometimes, you will be able to distinguish four black dots on the dorsal (back) side of each segment of the abdomen and a light-colored, upside-down “Y” marking on the head capsule. 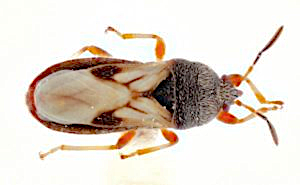 It has been a fairly hot, dry July and as a result, we are finding high numbers of chinch bugs in the Wake Co. area. Chinch bugs have been active in isolated spots on the coast for the last two weeks and as temperatures have consistently remained in the mid-high 90s with little rainfall, chinch bug damage has become more apparent. They are pests of warm-season grasses, especially St Augustine grass, and are typically more of a problem in open, sunny areas.