Find this article at:
go.ncsu.edu/readext?594638
— Written By Colby Griffin and last updated by Ginny Moore

As temperatures slowly creep upward during spring the Ruby-throated Hummingbird begins its trek northward from Central America into the Continental United States. The Ruby usually arrives in the Carolina Piedmont by April each year. In order to accomplish this, they must feed on nectar and insects and double their body mass from their overwintering sites. This means they increase in weight from a penny to a nickel. The Ruby-throated Hummingbird is Eastern North America’s only species of breeding hummingbird and is a common summer inhabitant of woods and gardens from Canada to the Gulf Coast. 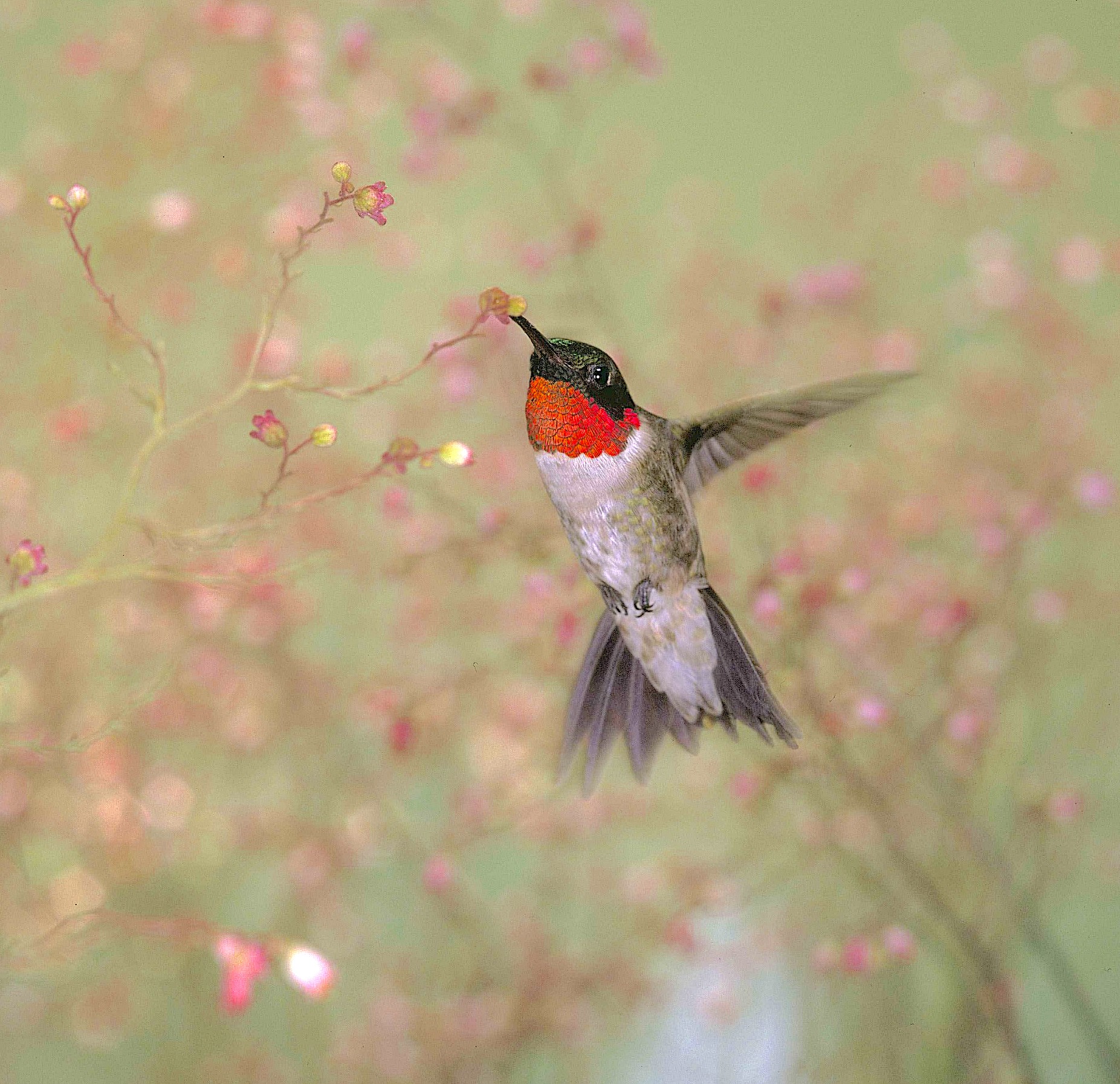 Hummingbirds are capable of flying faster than 30 mph, maneuver better than a helicopter, and can travel up to 23 miles a day. The Ruby breeds during the summer in temperate North America and spends the bulk of the year in Central America or the Caribbean. The male Ruby is the most colorful and easiest to identify. The most prominent feature is his throat which is Ruby in color. Other features include an emerald colored back and a forked tail. The female has an emerald colored back but has a white colored breast and throat and white tipped tail feathers. Adults only weigh three to four grams on average. Unlike most mammals and birds, female Ruby-throated hummingbirds are larger than males of the same species. Hummingbirds hover in midair to feed on flowers and home feeders and they are the only birds that can fly backward. Incredibly, their wings move in a figure-eight pattern. They are solitary birds and will defend a nectar source from other hummers that may try to feed in their area.

To attract hummingbirds, include a variety of flowering plants that provide nectar throughout the warmer months. Ruby-throated hummingbirds prefer the nectar from bright, tubular flowers, such as crossvine, Carolina jessamine, and red buckeye. Hummingbird feeders are good artificial sources of nectar and should be filled with a boiled solution of four-parts water to one-part white sugar. Contrary to popular belief, feeders can be left up year-round. Ruby-throated hummingbirds will begin their fall migration even if feeders are left outside. Another unusual hummingbird species such as the Rufous hummingbird may visit a feeder during the fall and winter months.

Most Ruby-throats leave North Carolina and other southern states by mid-October and don’t return until late March. If bees, wasps, or other insects are a problem at hummingbird feeders, try a five-to-one water-to-sugar mix, and avoid feeders with yellow in them (insects are attracted to the color yellow). Also, many feeders come with bee and wasp guards that may help prevent problems with insects. Be sure to change sugar water at least every three to five days to prevent mold and deadly fermentation. Clean feeders at least once a week with hot water and a bottle brush. Don’t use soap or a detergent. You can also clean hummingbird feeders by filling with a dilute bleach solution, but make sure to rinse them very thoroughly and allow them to air dry completely before refilling.