Find this article at:
go.ncsu.edu/readext?561140
— Written By Colby Griffin and last updated by Ginny Moore

I stumbled upon a rather humorous and anonymous quote recently that states, “It’s time for Fall in the South: pumpkins, mosquitoes, humidity, flipflops, and shorts…Okay, so it’s basically summer but with pumpkins.” Up until recently the weather was cooperating nicely with that statement as we were still experiencing above normal levels of temperatures and humidity for October in North Carolina. Luckily, it finally feels as autumn should and those pumpkins on your front porch look more at ease surrounded by cooler temperatures and hopefully a few less mosquitoes. Each fall, millions of Americans make the trek to their local pumpkin patch to purchase a vegetable they are probably unlikely to eat. Many people throughout the world use pumpkin as a dietary staple, in the United States these colorful members of the Cucurbitaceae (gourd) family are used primarily for decoration. Halloween and Thanksgiving would not be complete without pumpkins to add a festive air to these events.

The name pumpkin originates from the Greek word for “large melon” which is “pepon.” The French word for “pepon” was “pompon” and the English changed the latter to “pumpion.” We finally arrived at the current spelling and pronunciation when the American colonists changed “pumpion” into “pumpkin.”
Pumpkin is a generic name given to several members of the genus Cucurbita. These include C. maxima, C. moschata, and C. pepo. The names winter squash and pumpkin are used frequently for these species also. However, most of the large, orange ones sold for decoration are in the species C. maxima and the name winter squash is given to the other two species. More confusion abounds as the canned product used for making pumpkin pie is actually C. moschata, a species of winter squash. 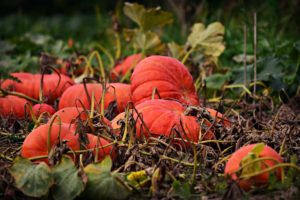 Pumpkin and winter squash are native to the Americas and have been cultivated since around 3500 B.C. Native Americans used pumpkin extensively within their diet. American colonists also relied heavily on pumpkin as a food source as shown by this poem (circa 1630):

“For pottage and puddings and custard and pies.
Our pumpkins and parsnips are common supplies:
We have pumpkins at morning and pumpkins at noon,
If it were not for pumpkins, we should be undoon.”

The colonists are thought to have prepared pumpkins by slicing off their tops, removing the seeds, and refilling the inside with a milk, spices, and honey mixture. This was then baked in hot ashes and is thought to be the origin of the modern pumpkin pie.

In the United States, pumpkins are also associated with the carving of Jack-o’-lanterns. This practice originated in Ireland where according to local legend, a notorious character named “Stingy Jack” was successful in tricking Satan on many occasions, much to Satan’s annoyance. When Stingy Jack died he was turned away from Heaven by Saint Peter for having lived a mean and cruel life. He then went down to meet with Satan. While alive, Jack had tricked Satan into promising not to take his soul when he died. Satan kept his promise and barred Jack from entering Hell. Jack had nowhere to go but to wander forever in the dark. He then asked Satan how he would see as he had no light to search for a resting place. Satan mockingly tossed him an ember from the flames of Hell to help Stingy Jack light his way. Jack always carried a turnip with him which was also his favorite food. Jack hollowed out the turnip and placed the hellish ember inside. From then on Jack roamed the earth searching for a resting place with his “Jack-o’-lantern.”
The Irish hollowed out turnips and other root vegetables for their Jack-o’-lanterns. They placed a candle in them to ward off evil spirits to keep Stingy Jacky away. When the Irish immigrated to America they quickly discovered that pumpkins were easier to carve and more readily available than turnips.