Find this article at:
go.ncsu.edu/readext?744677
— Written By Colby Griffin and last updated by Ginny Moore

Have you noticed a tiny, tank-like insect scurrying around the outside of your home? If you notice a dark olive-green bug with speckles lurking around your home this fall it is probably the Kudzu Bug. Kudzu bugs are 4 to 6 mm long. They are “true bugs” meaning they have piercing-sucking mouthparts. They are not native to North Carolina, having been introduced to The United States from Asia in 2009. If you happen to live nearby a soybean field then you have an increased chance of spotting this insect. The flying adults will congregate on the sides of homes and buildings as the weather cools as they move away from their soybean hosts. 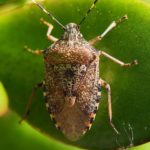 Kudzu bugs feed on legumes, plants within the bean family, so soybeans and even wisteria are a delicacy. As daytime temperatures and day length decline, kudzu bugs seek out protected areas where they can overwinter, such as beneath leaf litter and under rocks. They will find any small crevice around your home to seek shelter. This is also where they will lay eggs that will emerge next spring as adult kudzu bugs. Once the temperature warms next spring they will migrate to their plant hosts. They are also harmless to you, but can be a nuisance around your home and garden.

Another pesky bug you may notice around the exterior of your home this time of year is the brown marmorated stink bug (BMSB). This bug is an invasive pest that was also introduced from Asia in the 1990s. It was first spotted in North Carolina in 2009 and has since spread throughout most of the state. This stink bug can be a destructive pest to a wide variety of crops and usually establishes itself first in urban landscapes and structures that provide winter cover.

These stink bugs overwinter as adults in structures, standing dead trees, and other sheltered places. In April and May, the adults leave shelter and move into nearby woods where they mate and lay eggs on host plants. By June or July eggs have hatched and many of these 1st-generation BMSB invade fruit and vegetable plants. Later in the season they may move into soybeans and other field crops. In September and early October, adults begin looking for overwintering sites, and by late October most individuals have settled back into sheltered places. The months of September and October, when adults are aggregating on buildings, is usually when invasions to new areas are first observed.

Pesticides generally aren’t that effective at preventing kudzu bugs and stink bugs from gathering around your home. However, products containing bifenthrin will offer some short-term control. If you choose to use a pesticide be sure to follow the label and use as directed.