All face to face programs are postponed until further notice. The office is still open daily with limited staff.

Find this article at:
go.ncsu.edu/readext?287194
— Written By Charles Mitchell and last updated by Margaret Green

Shade trees require pruning for the same reasons as other landscape plants: Prune to conform to a specified size and shape, prune out excess branches to prevent rubbing together, removal of broken or damaged branches, double leaders or narrow v-shaped crotches. Most homeowners should limit their tree pruning to small branches, which can be reached from the ground. The pruning of large branches and work off the ground should involve professional tree experts with proper equipment.

Many folks are under the impression that large shade trees need pruning just because they’re getting too big and pretty or because it’s a certain season. We witness this all across the state. Before having a tree trimmed, know why and how it should be done.

Many pruning jobs could be avoided by knowing the growth habit of a specific tree. Find out how fast and how large a tree normally grows. With this information you can avoid many maintenance requirements. Logic and reason also apply. For example, don’t plant a white oak directly beneath utility lines. As the tree grows and interferes with the lines, the tree will be pruned. This completely destroys the natural character of the tree and often leads to its early decline. The same is true when choosing a tree for a planter or other limited space. Consider small or intermediate size trees such as Crape Myrtle, Foster Holly, Redbud or Japanese Maple.

How to Prune – The basic principles of pruning apply to trees. Cut back to a lateral side branch or bud, or back to live, healthy wood. Make the cut at a slant next to a bud that can produce new growth. “Thinning out” is a term used to describe removing an entire branch at its point of origin. This procedure results in a more open tree and is the least conspicuous of pruning habits. This also conforms to the normal branching habit of the tree. Remove “narrow” crotched limbs as they are the weaker branches of a tree.

“Flush cut and paint” has been the standard recommendation for pruning trees for more than a century. However, research by the United States Forest Service has shown that this practice may work against nature’s design and the trees’ best interest.

At the base of every branch is a collar that contains a chemical zone, which inhibits the spread of decay in the trunk. When decay develops in a branch, it moves down the branch until it reached the protective chemical zone. Once there, it stops and a callus forms after the branch falls off.

If the collar of the branch is removed during pruning, the chances of the trunk becoming infected by decay and canker-causing microorganisms are greatly increased. When pruning you should not make cuts flush with the trunk, but make them just outside the branch collar. The branch collar is the swollen area at the base of the branch that sometimes has a bark ridge. 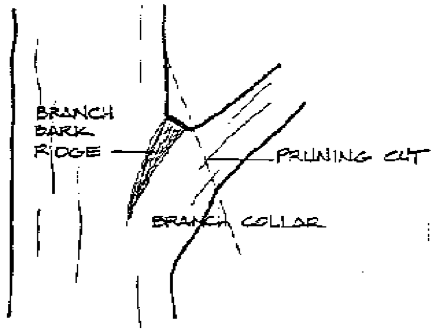 In the past, part of the standard recommendation has been to apply a generous coating of an approved tree wound dressing to all fresh cuts. It was believed this would prevent decay-causing infection. Research has also proven that all of the wound dressings currently available do nothing to prevent decay, and some serve as a food source for micro-organisms. There are experimental materials being tested that might help prevent infection, but they are not on the market at this time. A light coating of a wound dressing might be used for cosmetic purposes.

When to Prune – Also contrary to popular belief, pruning trees does not have to be limited to fall or winter. Granted, fall and winter are good times to prune as the tree is dormant. Spring flowering trees should be pruned immediately after blooming. Summer flowering trees could be pruned before new growth begins in the spring.

Maple, Birch, Dogwood, and Elms are known as “bleeders”. When these species are pruned in late winter or early spring, the wounds bleed. This flow of sap is more unsightly than damaging to the tree. Pruning these trees could be delayed to midsummer. When delayed until summer, one can readily detect which trees need pruning or thinning. The one time when trees should not be pruned is during early spring when buds are breaking and during leaf expansion.

Pruning Tools – There are specific tree pruning tools which should be used for the various size branches and pruning jobs. The smallest branches and twigs (1/2″ to 3/4″ in diameter) can be pruned with hand shears. The anvil-type pruners are satisfactory, but for close-cut precision pruning, the scissors- action pruner is recommended. For branches and limbs of 3/4″ to 2″ in diameter, lopping shears are used. Pruning saws are required for larger branches. These narrow-bladed curved saws with coarse teeth are designed to cut smoothly and cleanly. Pole pruners with telescopic handles can be used from the ground. Whenever climbing is necessary, be sure to use ladders, ropes or pulleys. Do not allow anyone in a tree with climbing spurs unless the tree is being removed. This can damage the tree and has the potential to lead to death of the tree.